I'm car shopping at the moment, and went to a dealership yesterday to actually drive something. When I showed up, the super shady used car salesman tells me "Oh, another guy is test driving that car right now. Should be back soon. You know, they're very popular cars. I can't believe we still have it on the lot."

First of all, I highly doubt someone else is out driving the car. I had an appointment time; it's not like they didn't know I'd be there to test drive THAT specific car. They knew all right.

Secondly, as popular as these cars are, this one's been listed on Craigslist for over a month now. It stretches my improbability muscle to believe that the day I finally get it together enough to test drive the car, someone else just HAPPENS to show up 10 minutes before me to also drive the exact same car.

But whatever. I came here to play, so let's play.


After about 10 minutes, the salesman pulls the car up-- funny, that "other guy" must've returned from his test drive around the block or something because we never saw him-- and I climb in and shift into first.

At that moment it becomes very clear (if any of us were still in doubt) that the car has not just come back from a long test drive. This is one of the diesel VWs; diesels are unmistakably sluggish when cold, and this car is cold. And sluggish.

The acrid electrical smell Miss G and I caught wafting from under the hood ("I'll be honest with you, you're gonna get that smell with all the diesels.") was plenty to convince me not to buy the car. I know what diesel smells like, and that was not diesel.

But the most entertaining thing about yesterday was this guy's attempts to play on my fear.

Someone's out driving the car right now. These go really fast. You're lucky we still have it. We sold our other one yesterday.

Trying to scare me enough to buy the car on the spot. And in someone more fearful, probably would've worked. Must work pretty often, in fact, or it wouldn't be his usual schtick. 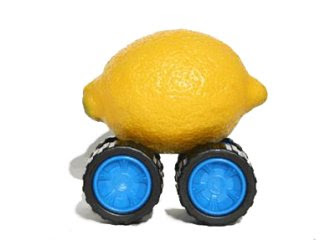 Ever since the Boston marathon, I've been thinking a lot about fear.

After sorrow at the level of tragedy that day, my next thought was "Please don't let this frighten our citizens into volunteering away more of our freedoms. Please please please."

A couple of my FB friends shared blog posts from the running community in the immediate aftermath. One says "I’ll tell you one thing – this makes me want to work my butt off to [compete in the Boston Marathon] again." Another, in response to the bombers' attempts to frighten himself and other runners away from future marathons, just says "It's not going to happen."

These runners get it. Fear isn't going to keep them from what they love.

Fear shouldn't keep any of us from what we love.


Fear is such a useful tool for keeping the masses in line; a velvet rope keeping us tidy and contained. And predictable.


I've spent a lot of my life making decisions based on fear. No matter how poorly those panicked last-ditch efforts turned out, I kept right on making them. It's hard not to; fear controls us so easily.

Fear of the worst case scenario keeps us on the designated path. Which I guess is pretty enough and all but all the really cool stuff is always off in the bush. And sure, those brambles are prickly and stiff to push through at first, which can be super scary if you don't know that release comes after the stretch.

Some people love the well-lit hallway. They like the safety and comfort of a defined future. Anything else feels super scary. And for a long time I wanted that predictability myself. I was so scared of not having the normal and the familiar life that I'd always envisioned for myself that I ended up trapped behind my fear-based decisions in that stupid boring hallway that was never a good fit to begin with.

Looking back from a place where I can be honest with myself, what I really wanted to do was explore that cool spiral staircase over in the shadowy corner. It turns out, maybe a normal and familiar future wouldn't have suited me at all. And I probably would have been better off if I'd admitted it sooner and gone for it, but I just couldn't get over my fear.

I'm ready to stop making decisions based on fear, and instead go forth in boldness. Step out onto the invisible bridge. Be honest with myself about what kind of life will best suit me. 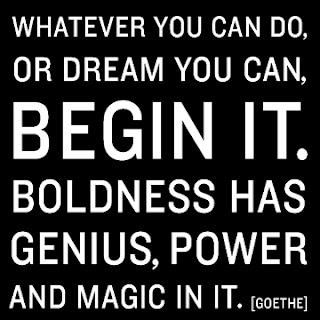 Fear is the thing we most need to conquer if we want to evolve into better versions of ourselves. But then, so many people are scared to do that too.
~ Mz M @ 11:01 AM