When I was a kid, some teacher or other gave us a stack of optical illusions that blew my mind. Excited, I went home and showed them to my sister.

"See?" I said "She looks so pretty, but then if you look at it a different way, it's an old woman. Do you see it?"

"No," she said, and went back to what she was doing.

I never thought about whether I had a choice to see one or the other.

It was my first real lesson in perception.

A few years ago, I had a similar lesson in context.

I was living in Tucson, and dating a guy who lived in LA. On one of my weekend trips to see him, I noticed a guy totally scoping me out at the airport. I gave him a flirty smile, and why not? I looked super cute in my T-strap heels and vintage cranberry velvet blazer. I felt like a million bucks, some exotic adventuress off to explore grown up life. The world was my oyster.

It turned out that was my last weekend trip to LA. On the way back, I wore sneakers and a sweatshirt, and hunkered down at the boarding gate under the weight of my freshly shattered heart. The same guy was on my return flight. I remembered him, and smiled again, but his eyes skittered right over me with zero recognition.

Because, I realized, I was out of context.

For example. In Vegas, when some idiot driver shoots across four lanes of traffic to the exit ramp, my instinct is anger. My perception is that this dude is an asshat aggressive driver. But on the other hand, I'm looking at his actions totally out of context with the rest of his life. Maybe there's something else going on.

Because I've cut across traffic like that myself. I read the directions wrong, or my navigator didn't tell me to exit soon enough, or I was having a massive panic attack. Those other drivers, they probably thought I was the asshat driver.

Sometimes we get so caught up in our perceptions of what is, or what we think things should be, that we lose sight of context.

It's just a matter of perception.

There is no "there" there.

It's our anniversary today.

I've written before about how Dan & I are opposites. One of the ways we're least alike is that Dan is a total 'journey is the destination' kind of guy.

Me, I always thought life was like climbing stairs. Each stair is an obstacle, sure, but then you eventually reach the top. You're there. You know... there. Despite the years and years of evidence I've lived to the contrary, I keep thinking that I will eventually reach somewhere static. And I keep holding that as my primary goal.


The older I get, and particularly since meeting Dan and learning to (mostly) appreciate his roundabout ways, the more it's sinking in that there *is* no "there." The next landing, maybe, if we're continuing the stair metaphor. But there are always more steps. More landings. Then more steps.

I thought marriage was a There. Like I'd arrived; we'd arrived together.

Turns out the last four years haven't exactly been a staircase.


Life gets exhausting when you feel like you're never getting there.

Now, four years in, I can say my marriage to Dan has finally taught me that ups and downs (and upside downs) don't have to be Sisyphean. They can just be adventures.

Turns out marriage is about the journey, not a destination. The point is moving forward together. 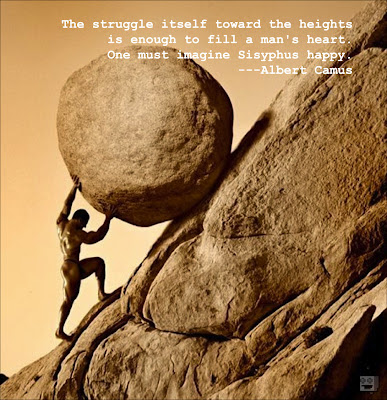 Normally I'd start with an apology to my half-dozen or so loyal readers for neglecting my blog.

Instead, I'll explain that I've been distracted by finding my balance.

You may remember a while back I took this writing job on a whim. What started out as an independent contractor gig that paid a penny per word became, as of February 1, a real-life grown-up job with paid vacation time and sick days and everything. Part-time, but still. Exciting!

Adjusting to this job-- which is pretty much the same thing I was doing before but just different enough to take 3x as long as it used to and also positions me uniquely to literally destroy the company if I screw up-- has me wavering.


In tree pose, my instructor says, you will waver. But this is not a sign of imbalance; it's a sign of finding your balance. You can't hold yourself so rigid that a little wavering knocks you off your groove.

I swear, part of the yoga teacher training must be a Life Metaphor section or something.

I remember my counselor telling me a story about something her yoga instructor said during class once and I said, "Wow, aren't yoga teachers so profound?" and she said "Seriously. Sometimes I think about just referring all my clients down to the yoga studio and closing up shop."

Now that my trial-by-fire month is over, my second month in feels easier. Steadier. Still nerve-wracking, but in an energizing way, not a terrifying way. And fun-hectic, new-adventure hectic.

Wavering, but in the sense of finding my balance. 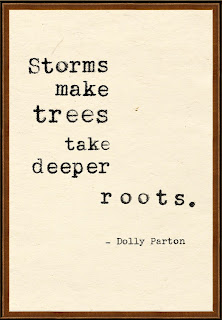