That is the one phrase I use more than any other to answer nearly every question thrown my way. And it makes me nuts. If there is one thing I hate, it's "complicated"-- and there is no way to stepparent without  gobs of complication.

I ambushed my poor sister the other day, who innocently asked if I thought the kids might be interested in taking an art workshop over our brief vacation in CO this summer.

"See, I'm not sure how long we'll be there. I know when we're arriving, but I'm not sure when the girls fly out with Dan because Miss L's mom says her husband's family is having a reunion in Oklahoma right at those dates. But we only have two weeks where all four of us overlap this summer, because I start work July 1 but Miss G is at the lake with her dad's folks till June 22 and then she's with her dad August 3rd till school starts and Miss L gets 10 days with her mom sometime in there so we're working things out with this new parent coordinator but we haven't gotten hard dates for sure yet so I'll have to--"

My sister starts laughing and I interrupt myself saying "I know, it's ridiculous, I'm so sorry. Even an easy question is like a 20 minute response."

I think about it a minute. There's only one answer.

Ode to my Husband

Every morning, before I'm quite awake, as I become conscious of the furry, sleeping person next to me, my first coherent thought is "Thank god for Dan."

I have never met anyone more compassionate and patient than Dan. He would have to be, to put up with me & Gwyn of course, but he is just... beyond.


I knew he was a gentle soul from the moment our eyes met, but didn't realize the depth of his capacity until we'd been dating nearly a year. We were grocery shopping with the girls, and Miss L was standing on the handle-end of the cart, jumping up and down between his arms as he pushed. He told her multiple times to stop jumping and she ignored him. As we left, she launched herself with a particular enthusiasm which sent her head directly into his chin, so hard I could hear the snap of teeth from across the parking lot. It made my jaw hurt for him.

We all went silent, braced for an explosion, Miss L totally still with big eyes like a hunted rodent. She is all too familiar with her mother's frequent outbursts, and expected no less from her father. I remember thinking "Finally, I get to see Dan lose his temper." I am not proud of this. It seemed abnormal for someone to be on such an even keel all the time.

But after a noise of strangled pain, Dan just said-- in a slightly choked voice-- "I really wish you'd listen to me and be more careful kiddo." And we continued to the car.

Me, I would have flipped out. There would have been yelling and cursing. I think most parents would have done the same.

The weekend Miss L refused to get on the plane, he called every phone line he could think of to reach her, to talk with her about what was going on: mom's cell, her cell, landline. Every attempt went straight to voicemail. Finally he just left a message.

My voicemail would have been flipped out, yelling and cursing straight up till the beep cut me off. I suspect most parents would have reacted similarly.

Instead, he said: "Hey kiddo, it's your dad. I'm sad about what's happening, but I just want you to know I love you no matter what."

And he didn't (as I and the other more petty members of the human race might have) leave this message as a guilt trip. Nope. He really meant it.

Dan didn't lose his temper till a couple days later, when Miss L finally returned his call with a sulky attitude, angry at him and calling him selfish. That was when I developed sudden empathy for the insane  emotional turmoil which drove Alec Baldwin to leave that nasty voicemail for his daughter a few years back. That was when I finally learned the answer to the question I've wondered for seven years now: What will it take to make Dan snap?

I don't blame him. I don't think anyone could. Most of us would have lost it much sooner.

Dan's first meeting with the new Parental Coordinator is today. Miss L's mom says Miss L cannot continue seeing us twice a month after we move to Colorado, though it sounds like this would have been brought up even without our move. Miss L is (we're told) too exhausted from traveling so much. Her grades are suffering. She doesn't see her friends enough. And this is not only her mom's idea; Miss L is agreeing with every word.

Dan says, okay. I'm not thrilled about this, but I can handle once a month if it's better for her. We can redistribute the lost days elsewhere. Her mother has over three weeks in the summer and half of Spring Break. We can rearrange.

There is silence from Miss L's mom. She does not want to give up more days. She just wants Dan to discard his parenting time and be happy about it.

As per the court orders, we now invoke the help of a third party: the PC. The magical gal who's supposed to wave her wand and resolve all the differences between parents.

Dan and I have discussed strategy, pros and cons, potential compromises, outlined defenses for the most likely attacks for over a week now. He feels prepared. He has lists.

Last night he comes home and I ask how he's doing. He's silent for a minute, then says: "You know, I don't even care. All I want is to be a dad to my kid without fighting tooth and nail to do it. I don't care if I only see her once a month. I don't even care if she barely talks to me in between visits. I really don't. I just want them to let me be a dad." 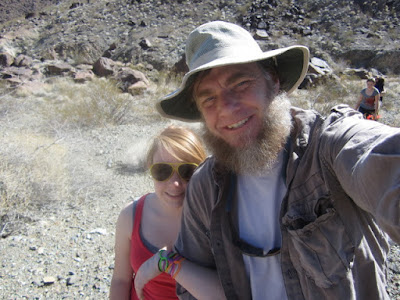 Me? I'd be flipping out. Yelling and cursing. I think most parents would.