It's been a good year. In the last decade, the number of years I could say that about have been far outnumbered by those that I couldn't wait to see the ass end of. But this-- this was a good year.

My one-word focus for the year-- fruition-- manifested amazing, powerful changes in my life. In our lives. I can't believe how many projects finally came to completion this year, many of which have been milling about for years without any forward motion.

Making a new life in a new state.
Working from home, full-time. As a full-time writer.
Kicking anxiety's ass. That's right, folks. I shop at CostCo now like it's no big deal.

And this month we finally sold our house, our last tie to Boulder City and our former life. FINALLY. After only 2.5 years on the market (under contract for the full two, just waiting for the bank to approve the short sale) and 1.5 years before that trying to modify the loan.


It was such a magical year that I debated for a while about keeping fruition on for my 2014 word too.

Then I realized that "fruition" itself has been brought to fruition. Its purpose has been fulfilled. It's bloomed. It's prospered. It's ripened on the bough, nourished us, strengthened us.

I've never felt more positive about heading into a new year. Not because I'm happy to leave this year behind, but because I really sucked the marrow out of this one. Of this year, and this word.

See you on the flip side, over at www.fillingyourniche.com.

When I was a kid, and through most of my adult life, Christmas was steeped in inviolable tradition:


Of these traditions, I have carried on none. I used to feel bad about it, but now-- now our new traditions have taken on their own sanctity.

Our blended family of four celebrates together, just us, on December 30th. And we've established, quite by accident, our own list of inviolable traditions:
With every year that we continue these traditions, they become more deeply ingrained for our kids. Maybe even to pass down to their kids. Maybe my stepdaughter will make lemony French toast for breakfast at Christmas for her own family, or maybe my daughter will play Blue Christmas for hers.

Or maybe we'll all keep celebrating our Paper Christmas together on the 30th, and keep our own traditions inviolable. Sacred. And something entirely ours.

So I didn't win NaNo this year, the first since I've been participating. I don't feel disappointed though-- or, okay, I'm a little bummed of course. But more on principle than in reality. Because I learned a lot of very cool things this year from NaNo (and my reflective stomach flu days, during which I didn't go near the computer), and particularly one big thing:

If there's one thing I don't need to be doing more of every day, it's writing. If I have extra time every day, I'd rather be doing something different. Something not at the computer. Something like painting or art projects. But not more writing.


And another thing: I'm not all that keen on writing fiction. You know how they say you should choose your career based on how you'd spend your time if you didn't have to work for money and instead you do whatever you want for fun? Yeah. For me "writing fiction" is nowhere on the fun list. I can do it. I even like reading my own stuff; I think it's pretty good. But I don't care about it. I see writing fiction for a living as just one more corner I'd write myself into, stuck somewhere because I'm good at something even though it's not necessarily what I want to be doing.

I love writing nonfiction though. Things that happened. Stuff that's in my head. Blog posts. Those things, I would write even if Dan and I were hopping into a hot tub full of money every night. And so I think if I am going to focus on more me-writing as opposed to work-writing then, as my niece used to say when she was learning to talk, "More of THAT."

Which brings me to my next piece of news.

As much as I love this blog, it's time for it to move along. I've gone from 2 views a day on a good day to around 40 per post on a slow day without any effort on my part (and really, a pretty severe lack of dedication, what with posting at random times and on totally disconnected subjects and all). My top posts have over a thousand views each. That sounds like a high number, but it's pretty low when you think about how big the Internet is. Low, but telling. And it makes me wonder how many views I could get if I actually focused on this.

I really love writing these posts. I even love finding the stock photos, adding quotes to pictures... combining words and images: my two great loves. I feel like I'm building something, even if it's only for me and my two or three loyal readers. So, back to the doing what you love thing-- well, I love this; maybe it's time to get serious.

So this blog is moving to a new home and will also be getting a facelift. I guess if I can get up early every stupid day to write more words for NaNo, I could also get up early and learn WordPress, build myself an actual website.

The blog is getting a new name too. One day I was talking to my sister, back when Dan and I were just dating. And I said "You know, the kids were playing, and they were actually getting along for a change and Dan and I were sitting there holding hands, and his phone was off so there were no nasty calls from his ex, and we were happy for a minute. It was almost like we were an actual family. Almost like... like..."

And I knew when I started this blog, that was the only name it could have.

Over the past year, though, I feel like I've cheapened my all-the-way-real life by describing it as only almost real. My life may not match what I thought it'd be like (does anyone's?) but it's definitely real. And by saying it's only almost real, I keep this carrot out there for myself like I'm going to get to actual life at some point. Like I'm not there yet. 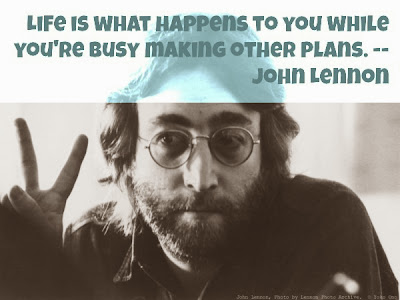 Anyway, I'll keep you posted on the new blog name (that's a surprise) and the new address (once I have it), but the grand plan is to make the big move for the first post of the New Year. In between then and now, stay tuned. We still need to talk about how the second half of my Year of Fruition went.

I might also be self-pubbing a little collection of favorite posts from this blog before it's retired. If anyone's interested in that, you should let me know. Also if you have any particular posts you'd like to see included, let me know that too.
~ Mz M @ 6:10 AM 2 comments