Every other year of Peep's life, she's been traveling somewhere exotic around Hanukkah time and while there may have been presents, it was not a big deal. This year, though, she and her baby sister are kicking it with me over the weekend while her folks move into their new house-- and this weekend happens to be the first couple nights of Hanukkah.


When I was a kid, Christmas was a huge deal. Candlelight, singing, gobs of people and presents piled higher than my head. (And horrible, horrible lutefisk... but that's another post.)

My grandmother was super into Christmas; my parents continued her traditions and passed them on to us. I've always loved Christmas-- oh sure, the presents... but the music, the way people are nicer, the twinkly sparlky-ness of it all. And above it all, the sense of magic.

My sister wrote more eloquently than I could about not feeling marginalized at Christmas when you're Jewish. It's heartbreaking for me to imagine, as a kid, seeing all that amazing-ness that the stores haul out for Christmas and knowing that none of it is for you. 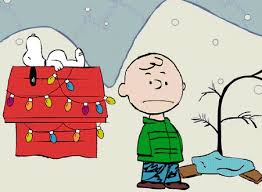 Also, as an auntie, I consider it my god-given right to spoil my nieces like crazy at the holidays and lavish them with presents. The name of the holiday we're celebrating is secondary-- tertiary, even-- to the actual celebration and watching kids' faces light up as they open presents.

My sister was all "Oh, if you don't want to deal with it this weekend, it's fine; Hanukkah isn't a big deal" and I was all "WHAT?!" Because, no glitter? No presents? No awesome magical-ness??

As my sister often does, she looked sort of bemused at my high level of emotion. And then gave her blessing to do whatever I want this weekend.

So, Miss G and I are reading up on Hanukkah.

Elements I have going for me:

What I have going against me? 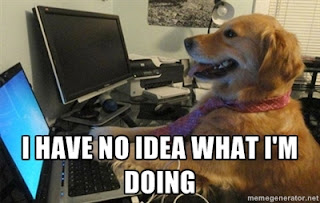 The punchline is, Hanukkah itself is a pretty minor holiday in the Jewish repertoire. The vibe I get from most online (Jewish) sites toward Hanukkah is one of surly reluctance. And I guess, stretching one night of oil to last eight nights is a pretty lame miracle compared to oh, say, Rosh Hashanah, which celebrates that one time G-d created the entire world.

Plus considering how often the Christians have killed off large numbers of Jews, it's not hard to see why just maybe Christmasizing Hanukkah could make Jewish families a little bit cranky, especially when you have to start hearing about it back in October (something that, for the record, makes me cranky as well).


I mean, why should Hanukkah have to compete with Christmas? And when did Christmas get so competitive anyway? Why can't Hanukkah be its own thing? 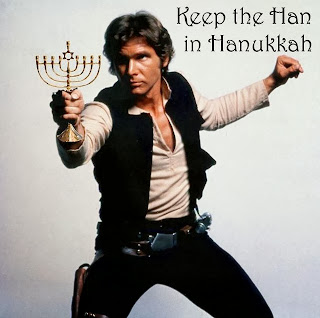 So, this year we'll carve out a little spot for Hanukkah at our house.

I don't have a menorah, but I have some lovely silver candelabras that were my great-aunt's; I think she'd appreciate the sentiment. And I've never made latkes, but I'm going to make regular pancakes for dinner and that's always a treat when you're four (or if you're my husband). And Peep has asked to make gingerbread men cookies-- "Except can they be girls?"-- er, okay, gingergirl cookies.

And we can absolutely celebrate miracles. Even little ones.